A few words about

Ambassadors is located along the quay of the 700-year-old Venetian port of Chania and grants a sense of modern comfort and luxury to this historic, neoclassical building from the 1890’s.

The building was the private residence of German Ambassador R. Krüger and his wife Wilhelmine, and was built in 1890 when the Ambassador first arrived on the island. Krüger was a person of many interests, having studied archaeology, fine arts and economics. Being a fan of photography, he created many city-themed postcards, kept intact to date. With the help of his wife and the Pet Rescue Association he tracked down a number of antiques, lying about neglected across the surrounding villages.

Moreover, he played a great role in the historical events of his time as a diplomat, but also as economy and technology scholar, for the Greek and Cretan people. At the same time, he founded the first cement and oil factories and influenced the use and processing of a number of materials, which he imported and exported: metal, textile, ceramics, glass, paper, wood, fertiliser, cigars, leather, soda, beer, soap etc.

In honour of Krüger’s contribution to our city, each room of the hotel is themed after one of the materials and goods imported or exported by the ambassador. This is essentially a modern way of reflecting on the benefits Krüger bestowed to Chania.

The hotel is situated exactly inside the Venetian Port of Chania, a stone’s throw from the foot of the sea. The Venetians, who ruled Crete, built the port between 1320 and 1356 to conduct maritime trade, serve their military ships and control and secure the Sea of Crete against the pirates. Chania was under Venetian rule between 1252 and 1645, when Ottoman (Turkish) rule took over until the end of the 18th century.

The harbour’s gem is a beautiful lighthouse, originally built by the Venetians in the 16th century. After the end of the Turkish regime, the lighthouse was destroyed, and rebuilt a minaret, under Egyptian rule (1831-1841), still standing to this day. In 2005, it was restored one last time after having being bombarded during the Second World War. Nowadays, the lighthouse remains a beautiful symbol at the heart of the Old Port. 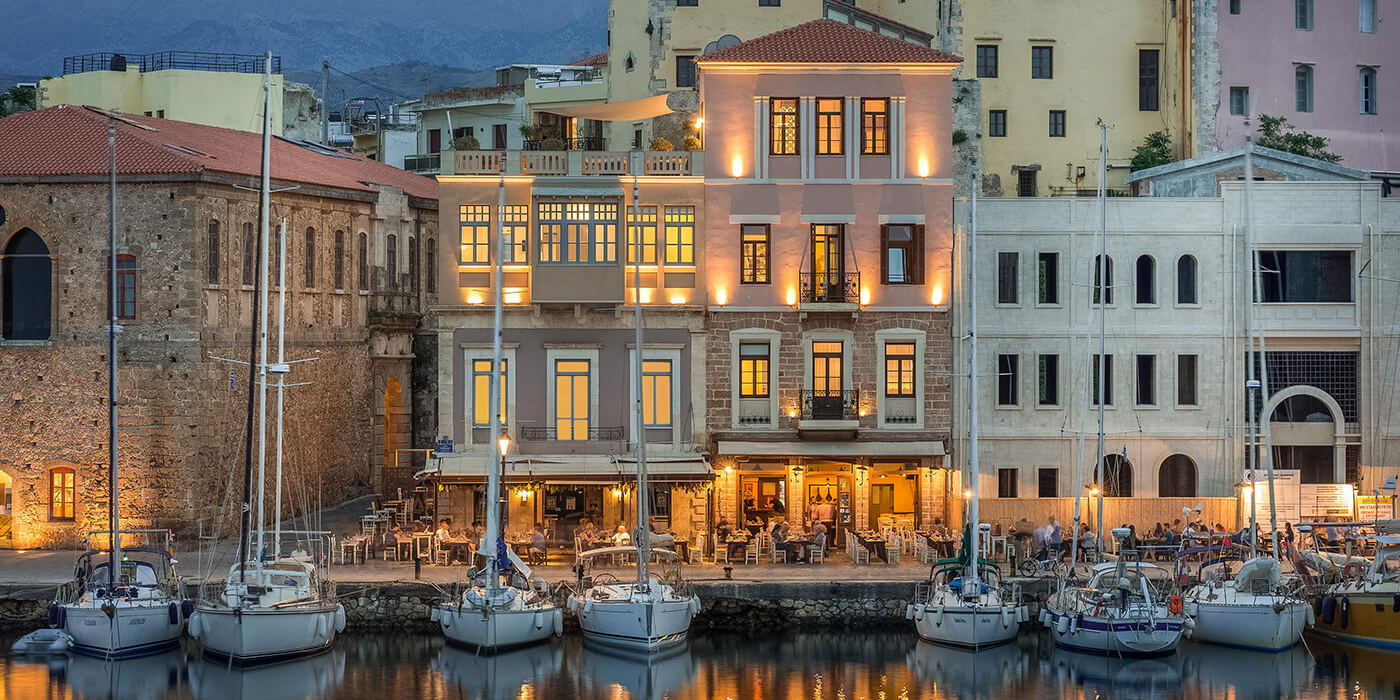 Each of the thirteen rooms at Ambassadors matches the materials Krüger traded, namely porcelain, wood, glass, fabric, cement, ceramics, paper, mosaic tiles, metal, brick, stone, mineral and vitraux. The motif that visually brings these sundry materials together was discovered at the existing building and seems to have been thought out over a century ago at Krüger’s factory. This motif emerges across the rooms in the decoration and interior design.

All rooms boast a contemporary and elegant design with subtle touches that highlight the heart-warming Cretan land and people. Organic textures, traditional furnishings, environmentally friendly decoration and old material recycling complement elegant, modern lines. Flooded with natural light thanks to large windows, the rooms fully meet your every need whether you’re here on leisure or business. Witness a sense of modern luxury and genuine hospitality at the Ambassadors Residence Boutique Hotel and get ready for a stay that not only will satisfy but also exceed your expectations!